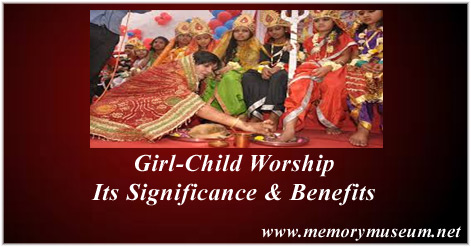 Navratras is a festival of joy, gaiety, happiness and beauty. It is believed that during the nine days of the Navratras, the Goddess mother roams the earth and bestows her blessings on her devotees. During Navratras it is a tradition to worship and feed girl-child [virgins] who are in the age bracket of 2years to 10 years; they are believed to be the direct links to the mother goddess and a devotee can access the mother thru them and earn her benevolence. They are considered a mortal form of the mother goddess, herself.

According to the scriptures,

A girl of two years is referred to as a Kumari worshipping a Kumari removes all misery and poverty.

A three year old girl is referred to as Trimurti worshipping a Trimurti begets wealth.

A four year old girl is called Kalyani. Worshipping Kalyani ensures success in all spheres of life and bestows a devotee with wealth and prosperity.

A five year old girl is called Rohini her blessings remove all kinds of ailments from the devotee s household.

A six year old is referred to as Kaali her benevolence grants success in all spheres of life and enhancement of knowledge, intelligence and fame.

A seven year old girl is referred to as Chandika her benevolence bestows wealth, prosperity and luxury.

An eight year old is called Shambhavi- her benevolence bestows success in battles and legal matters and also the devotee attains fame.

A nine year old girl child is believed to be the goddess personified. Worshipping her removes all obstacles in life, enemies are destroyed and even the most arduous task become successful and achievable.

A ten year old is Subhadra personified. Worshipping this personified girl-child a devotee achieves all that he desires and his life is abound by happiness.

It is because of the above enumerated reasons ,worshipping the ten forms and giving them gifts as per ones affordability and capacity will bestow the devotee with all that he desires .Gifting these girl-children with flowers ,make-up articles, fruits[sweet],rice porridge ,garments etc and some monetary donation grants the devotee the benevolence of the goddess. If you are performing havan [sacrificial fire] at home, make sure they too are included in making offerings into the fire.

It is traditional and a part of the ritual to wash the feet of these little ones with milk and seek their blessings. Apply vermillion powder on their dainty feet and sprinkle flowers and rice on them on the ninth day [last day] of the Navratras ,the meal should be of rice porridge ,beans and poories made of wheat flour dough kneaded with milk.

They should definitely be fed betel leaves , cardamom[elaichi], halwa / rice porridge,jalebi / any sweet and given some monetary donation; when they leave the house gift them with a chunri [head scarf] and any type of a utensil and see them off like you would see off your own daughter. When they are leaving ask them to bless you and your house by sprinkling rice grains over your head.- do not forget to touch their feet and seek their blessings when they are leaving your house.

By these rituals Goddess Durga is much pleased and blesses her devotee with all the happiness, fame, wealth and prosperity.

Friends this site is absolutely free .if you are in any way being benefitted by the contents of this site or you have found the contents and what is being offered on this site as useful then as a token of your appreciation we request you to kindly visit this site as many times as possible and also ask your friends and relatives to do so and benefit from the remedies,tips and advise that is offered ..THANK YOU !!

Pandit Jihttps://www.memorymuseum.net
MemoryMuseum is one of the oldest and trusted sources to get devotional information in India. You can also find various tools to stay connected with Indian culture and traditions like Ram Shalaka, Panchang, Swapnphal, and Ayurveda.